Another week, another artist! I shared my Van Gogh project last week. In week 2 we covered Henri Matisse. His personal story really resonated with the students, being a group of adults with varying disabilities. 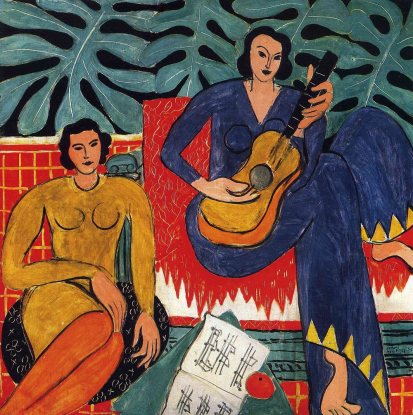 Matisse spent the majority of his artistic career as a painter, being one of the leaders of the Fauvism movement in the early 1900s. Fauvism is characterized by a painterly, non-realistic representation of people and objects and a strong use of bold “crayola crayon” colors. Unblended strokes of pure color divide objects from their background rather than shading. He wanted his art to be calming and cheerful, an escape from the world’s troubles. In 1941, everything changed when Matisse was diagnosed with cancer and had to have surgery. His life was saved, but from that point forward he required the use of a wheelchair for mobility, and struggled with dexterity. Matisse famously said, “Creativity takes courage“, and at the age of 72 no matter how he had changed physically, he refused to give up on creating. He shifted gears to a cut paper collage format for his work as painting was harder to manage with his dexterity changes, creating yet another influential body of work. He ended up liking this new, modern style even better than what he had been working on before, and you can still see similar shapes, styles, and color schemes taken from his paintings and applied to his collage works, such as the organic leaf shapes. His final project was stained glass windows for the Chapelle du Rosaire de Vence as seen pictured above, designed in his iconic collage style.

Though the term disability pride wasn’t part of our vocabulary at the time Matisse was alive, I think his legacy perfectly embodies this concept. He did not look at disability as a barrier, but an opportunity to innovate.

For our project, we created beautiful decoupage bowls inspired by Matisse’s paper cut works. I chose to focus specifically on shapes present in his chapel design, though if you do an image search of his collage work you could find many other ideas. I cut patterns out of some scrap matte board for the students to trace. We used colored printer paper for the cutouts – It is thin enough to be able to bend along the round shape of the bowl without popping back up or creating massive wrinkles, but thick enough that the color of the bowl won’t show through. We used matte Mod Podge to apply and seal the shapes onto the bowl, and the bowls themselves were picked up at the dollar store, making this a ridiculously inexpensive project with beautiful results. 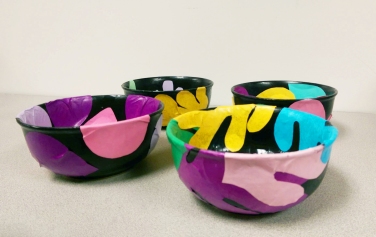 This would be a fun project to do with all ages from kids to seniors, and makes for a great gift idea if planned closer to the holidays or Mother’s Day. Since Mod Podge is not food safe, obviously you do not want to try to eat cereal out of these or something ;), but they are a perfect catch all for jewelry, keys, pens pencils and paperclips, or change. Also a cute decoration when filled with decorative orbs, glass marbles, or stones. I love color, and may just have to make one of these for myself at home!

I feel like with the completion of my ongoing Unlimited series in addition to working with art classes 9-5 for my day job, I got a bit burned out from drawing and painting. I have to be creating something at all times though, so I have changed my focus as of late to crafting just in time for holiday gifting. I have tons of fun handmade wonders available in my Ebay Store, like the hand-sewn ornaments below … These make great stocking stuffers because honestly, you can never have too many ornaments. 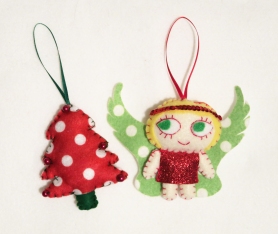 If ornaments aren’t your thing, everyone needs to keep their hands warm as it gets chillier outside. I love fingerless gloves because regular gloves and mittens make me feel as if my fingers were in 10 tiny straight jackets, and I feel like they make me clumsier than usual and I drop everything. With these, your fingers can experience sweet freedom!

Maybe one day I will become better friends with sewing machines, but for now I stick to hand sewing or crocheting as those monsters scare the crap out of me!

When I say I’m going on a crafts binge, I’m not lying – though I guess I did lie earlier about the total painting hiatus. I can’t entirely abandon painting but I switched from paper to wood to create these artsy, modern, geometric designed wooden bead necklaces. I also painted some new wooden dolls in winter wear to fit the season! 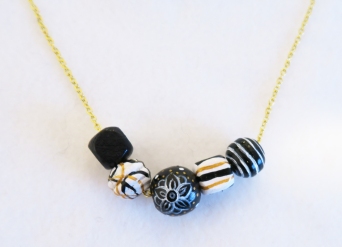 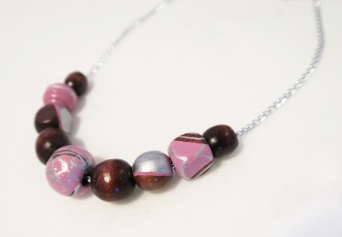 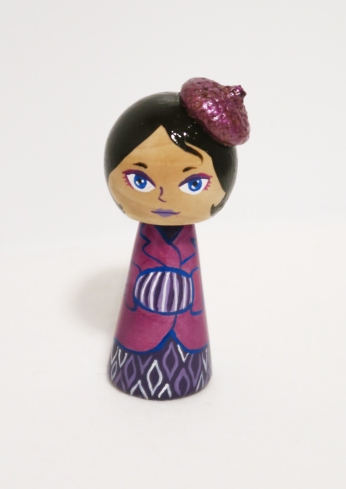 As always, in addition to ebay I have a variety of cool, art-covered products in my Redbubble Shop. I’ve been experimenting a lot the end of this year with watercolor patterns. I know paper calendars are kind of old school, but I love them still just for the pictures! I have a calendar of the 12 pieces included in my Unlimited series new for 2018. These calendars are super high quality on thick, art print quality paper so when you are done with it you can even cut the pieces out and frame them. 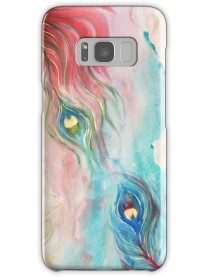 It gets so hard to figure out what friends and family want that they don’t already own year after year … I know I have quite a few things from Redbubble on my wish list ;). Definitely hoping Santa brings me a hoodie with this too cool design on it by katepowellart …

Where do you guys like to find unique gifts?

Say hello to December – She Is Connected To Everything. What can I say, I’ve been on a roll lately. I don’t think I’ve ever finished so many different pieces 2 days at a time in my life … Granted, I haven’t been doing much of anything else in my free time, as the pile of dishes in the sink will tell onlookers ;). Though all the pieces in my current series I’ve been working on are similar in style and use of medium, I wanted to keep them different enough that each could stand alone as well. I went a lot softer and less graphic, high contrast with this piece. I even used some leftover dried moss I had purchased for a felt floral arrangement commission earlier this year in the girl’s woodland crown. There is something I never thought in a million years I’d ever use in one of my drawings!

I have been getting all my series posted to my Redbubble Shop as well, available for print on a variety of gorgeous items. My series also finally has a name … Unlimited. Each individual piece has it’s own title and the works cover a variety of different themes, so coming up with one title to encompass the whole was a struggle. At it’s heart though, this series is about the best of humanity, and about the strength, curiosity, compassion, and vibrancy of women across time, nationality, and ability. It is about the common ground that unites us, and when people come together, they truly become unlimited.

One of the great things about the internet is that artist made products are literally EVERYWHERE, both original items and printed or graphically designed wares. I actually have a couple shirts I ordered from Threadless in college that I’ve kept for 8 years and can’t part with, though they are now either disintegrating or have super attractive sweat stained armpits. I’m planning to do fabric wrap canvases with them and use them for cool wall art because the designs are so gorgeous, I just can’t abide by throwing them in the trash.

Plenty of artists are out there on ebay and etsy and multitudes of similar platforms willing to customize their work to that special someone you may have in mind. I myself have just finished up an eclectic variety of custom requests, from hand drawn pendants to dolls to an artsy floral arrangement, which was definitely a first. 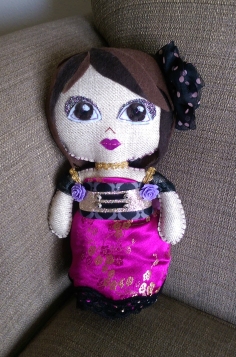 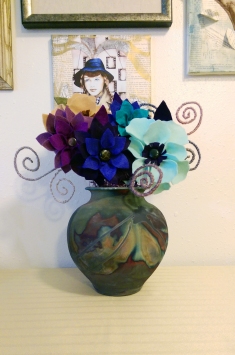 Basically, there is no excuse for giving a boring gift.

My day job (a pretty cool day job, if I do say so myself :)) is working as Program Coordinator for Express Yourself Artshop, an inclusive arts program geared towards serving all adult students, including those with disabilities. Many of the students are learning how to sell and market their work, and with Spring here we are beginning to prepare for multiple art and craft fairs.

With Mother’s and Father’s day coming up, it’s always best to start early. Creative gift guides are awesome, but oftentimes everything listed is in the 3 figure range …  I’ve put together some affordable guides that are a little bit of what I have to offer, a little bit from some of my amazingly artsy aquaintances, and a little bit from artisans I admire throughout the web. 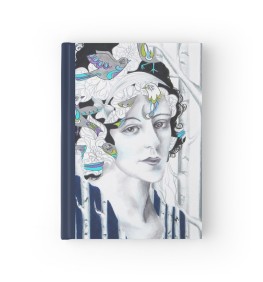 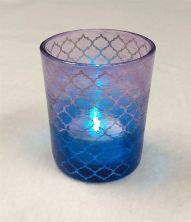 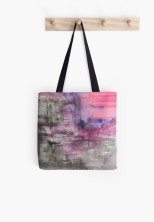 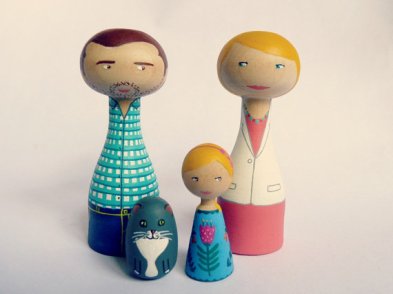 Ok, so the personalized wooden family is kind of pricey, but it’s just so darn cute!!! 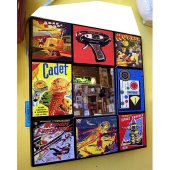 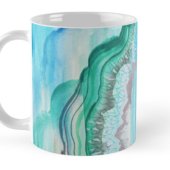 There are plenty of regular neckties to be found on etsy as well, but as the 11th Doctor says…

I hope you’ve enjoyed perusing. Now, hop to it! Time waits for no one ;).