It’s been awhile since I’ve done an Artists To Know Segment, and inspiration is everywhere. Despite being a completely visual based person, I resisted getting an instagram for longer than most just because the idea of yet one more social media account to manage filled me with a sense of intense existential dread if I’m honest ;). Finally, I realized as an artist trying to showcase and sell work I needed one for the business aspect alone and relented. Now I don’t know how I lived without it! I have discovered so many new and inspiring artists from all over the globe, but if I had to narrow it down to just 5 for right now, here are my tops.

Roukes is a painter from the Netherlands whose work has been exhibited worldwide, and he is one of the only artists that work in more “chaotic” scenes whose pieces I’ve ever been deeply attracted to. In my own work I am so orderly and controlled, repeating a select amount of the same visual tropes within one piece with balanced space for the eye to rest … I’ve always tended to get stressed out by work filled with conflicting styles and a ton of disparate elements bundled all together, but I have loved every single piece of Roukes’s work that I have seen. The vibrant, unique color schemes and photo-realistic detail  that combine classical influences with modern experiences and street art are unlike anything else I’ve seen, and the thoughtful composition makes combinations of visuals that shouldn’t work together somehow work perfectly. Beginning as a graffiti artist, he now focuses on large-scale murals that combine his own experiences, global politics, and pop culture in a dark but also surprising and often comical way.

Berglund hails from Belarus, but received her arts education in the United States. Her focus is in portraiture. Unique takes on the portrait tend to be my favorite type of art, so I was intrigued by her work the moment I saw it. Berglund has equal parts Eastern and Western visual and ideological influence, which gives her a different perspective based on her experiences. Much of her work is also influenced by traditional religious portraiture, but at the same time aims to challenge religious iconography, and both Russia and the United State’s representation of what it means to be a woman. Though the work above was what first that grabbed my attention, if you visit her portfolio you can see the wide range of styles she works in, and the strength and story that is apparent in each portrait. Her mission through her work is similar to what I hope to achieve, and I find her a huge inspiration.

Blanxer is from Barcelona, and actually graduated from university only 2 years before I did, so what have I been doing with my life -_- (I kid, mostly.). He works in both exterior murals, covering buildings in large-scale artworks, and on canvas. His canvases still integrate the cityscape as he seamlessly combines reflective urban scenes with traditional portraiture. What amazes me is how nothing gets lost in the merger. He strategically places the human elements and the architectural elements in such a way that the viewer’s brain can fill in the blanks and complete both scenes. This series appears to me like the viewer is seeing what the subject of the portrait is looking at through their eyes reflected back over them, as if we are being allowed to gaze into their mind, and that is what makes his art so powerful to me. 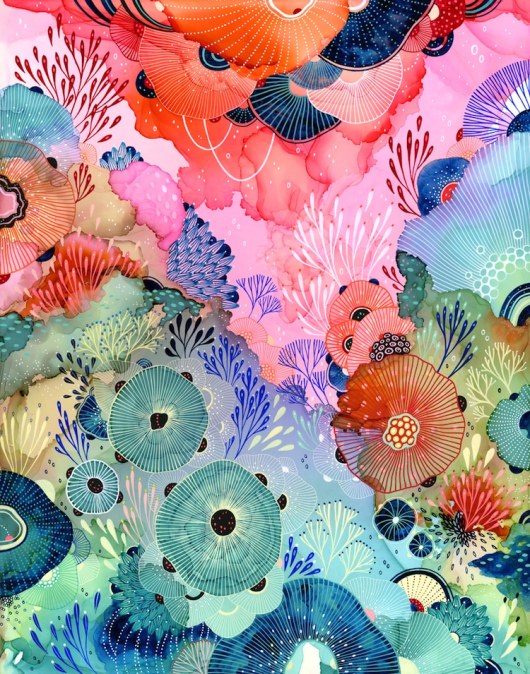 James grew up in Bosnia, but moved to the US at 18. Her background is in both fine art and graphic design, but she says she has always preferred paint and ink to digital means of creation (yes!). In addition to her personal fine art she continues to design for well known brands like Anthropologie and Crate and Barrel among others, and has published an interactive art book about applying the geometry of nature to drawing practice. James creates imaginary ecosystems inspired by the natural geometry present in the world around us, and says the process of building details in each piece is a form of meditation for her. I find myself getting immersed in her colorful botanical illustrations, imagining myself as part of her magical worlds, and her work has an intensely calming effect on me. I’m calm about 5% of each day, so this is nice.

Oliveira is from Brazil, and is also mainly a portrait artist. I have a draw, I can’t help it! His drawn portraits are photo-realistic but incorporate surreal elements from nature or at times unfinished boundaries. There is a strong, silent emotion that resonates from his figures’ calm, reserved facades that is so moving, relateable, and true to life.

I hope at least one of these artists have left you feeling inspired, and if you ever have ideas of artists or types of art you’d like to see featured let me know!

As for what I’ve been up to in my own creative universe lately, I was chosen to be part of the 50 Artists of the Great Lakes Bay Region Exhibition, and will be showing my new piece Torn in Studio 23’s gallery in the Fall. A metal print of my prismacolor pencil and mixed media work Wonderland will also be on display along Bay City’s Riverwalk trail for the next 2 years. It’s a couple days from September, so I am also officially in production mode for my annual Halloween ACEOs, so look for those in my eBay shop with more still to come! Check back soon to see the collaborative projects I’ve been working on in the meantime alongside some portrait commissions and logo designs. I’m ready for a busy Fall <3. 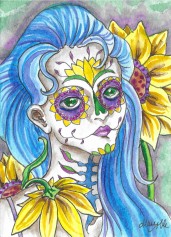 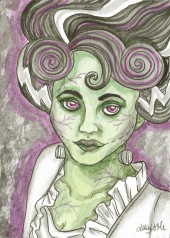 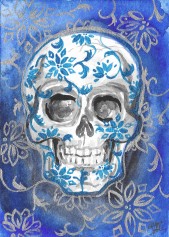 I just got back from one of the most fun trips yet to the charming and exciting land of Ludington, MI; hiking, swimming, sketching on the beach … my boyfriend and I were determined to jam in everything that epitomizes summer before it’s too late! I vowed to not check my email to make it a true reprieve, but I did peek just once in the car on the way there, and I’m glad I did because I got some awesome news. Two of my pieces were accepted into Studio 23 in Bay City’s Women’s Perspective show for September! If you’ve read my earlier post, ladies sometimes get forgotten in the gallery scene even today, so I am excited and honored to be a part of what I’m sure is going to be a wonderful show. Below are the two works that will be showing. If you’d like to learn more about the process of creating “On My Mind”, you can visit my earlier entry focusing on this piece.

Another fun surprise was the new murals up in Ludington to take touristy photos in front of! Art truly is everywhere, and it is wonderful. Murals aside, not to be cheesy, but one can’t look at the serene layers of bright blue water, warm yellow-beige sand, and bold green foliage and not see the very world we live in as one of the largest, most complex creations to ever exist, and truly the largest, most interactive art project.

Me posing oh-so-cool in front of my favorite mural of the bunch. 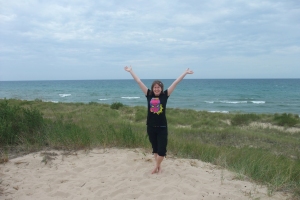 Behold, bright colors! Yes, that is Spider-man on my t-shirt.

I just ate it after a huge wave literally knocked me on my butt while I was wading out. There were weather warnings out all day, which of course means perfect time to go swimming! Thrill seeker for life, man.

The Bunny Invasion has begun!

I discovered something wonderful a couple days ago, namely, the city of Saginaw Michigan had been taken over by giant bunnies. I love art like that, the kind of art that pops up and surprises you in your everyday environment. It makes you stop in your tracks, whatever you are doing, and just enjoy the moment. I ran around like a little kid visiting every single one; it was a great time.

Since Creative 360 was closed for Easter weekend, I also finally got the opportunity to finish the murals I’d been painting on the doors! These doors used to be a really gross shade of brownish-grey, and the goal was to wake them up to go with the rest of the imaginative, creativity-inspiring interior. You can’t exactly tell in these cropped shots that only show a part of the building, but this place is really really colorful – the ceiling gives a hint. I wanted to use the design on the door leading to the lower level to act as an indicator of what activities go on in the basement. I also wanted what was behind the door to be visually communicated in a clear manner so guests and customers wouldn’t be confused, but  without having to write out a big ugly, block lettered, “DOWNSTAIRS, or STEPS” plastered right over the mural. Since the door to the basement is usually left propped open when classes are in session, I also needed a design for the backside. I’m happy with how they turned out, especially stepping back and seeing all 3 together. Enjoy the photos!

I hope you all have a wonderful Easter, and even if you don’t have traditional activities planned, do/see/experience something that is out of the ordinary and makes you smile, even if only for 5 minutes.

The two restroom doors, and the exit to the downstairs classrooms. 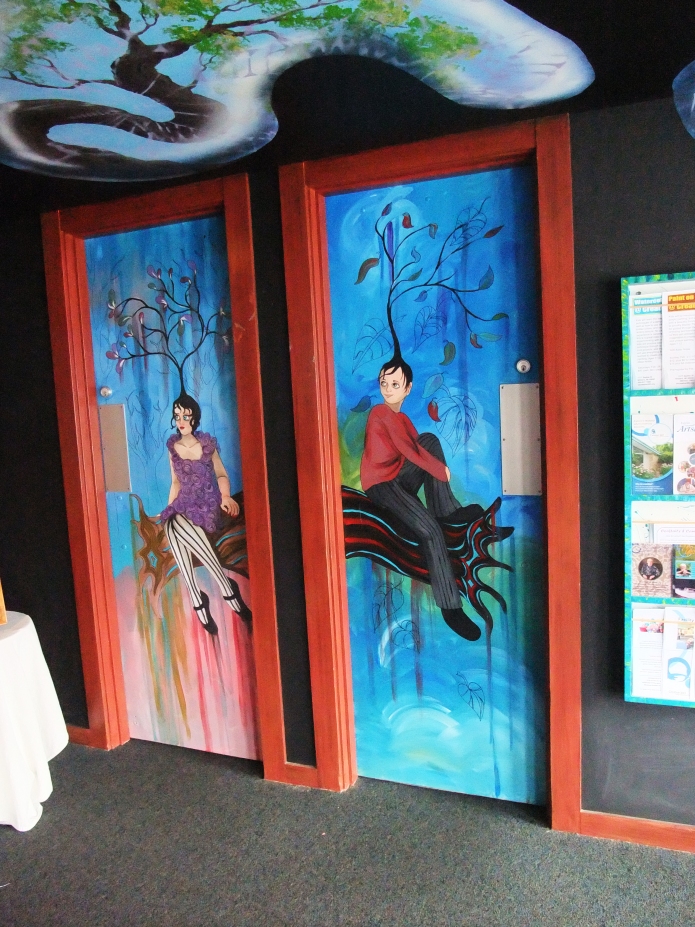 The other side of the door to downstairs, which is often left open while classes are going on

Approximately 2 years ago. Clearly, I am no stranger to making friends with rabbit sculptures.