I have been slowly adding to this piece over the last couple months. It went through some stages where I wasn’t really sure if I even liked it, but lo and behold, in the end I think it all turned out just fine :). I usually use only one or two shocking, bright colors in a piece at a time (with the exception of illustration/graphic design stuff when it calls for it) and never primaries like this, so I must admit the color scheme did freak me out a bit and I was sure for a moment that I’d made a terrible mistake. However, adding the dripping watercolor from the bottom to blend into the blurred figures in the background really tied it together. I wanted to use these “childlike” colors to reinforce the idea that we are seeing the environment through the eyes of the girl. This is also the reason why I made the drawn on windows on some of the buildings in the back simplified, and more “sketchy” and didn’t use a straight edge. This decision also greatly freaked me out at first. Apparently I don’t do a whole lot of “childlike” illustration. This was definitely something new, and it’s been a wild ride and I am pumped to move on to the next thing :). I really don’t know how some artists work on one piece for years, I’m always anxious to finish up and get on to the next big idea! I took in-progress photos this time, a first, and really must remember to do this more often.

Starting with the midtone shading of the skin … I know I have mentioned before it’s usually best to start with the background first. However, since I knew I wanted to do the background in ink, I reversed the process. Since primsacolor pencils are oil based, they provide a barrier so that the ink mess doesn’t get all over the area where I want the figure. Sometimes you have to alter your process to best suit the materials. I’ve learned this mostly through trial and error.

Next on to the hair, and I also did a little trial of the color idea by filling in the rabbits on her shirt … still scared of the bright colors!

I decided to fill in black behind the pattern on her shirt to balance the dark areas in the composition, and also to “anchor” those darn rabbits to something! I also inked in the blurred figures rushing by in the background, softening the edges with water, bleeding the ink. 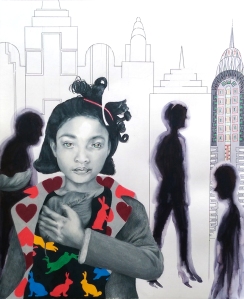 I added more color by putting a pattern on the lapel of her jacket, and began rendering the cityscape in the background in ink. 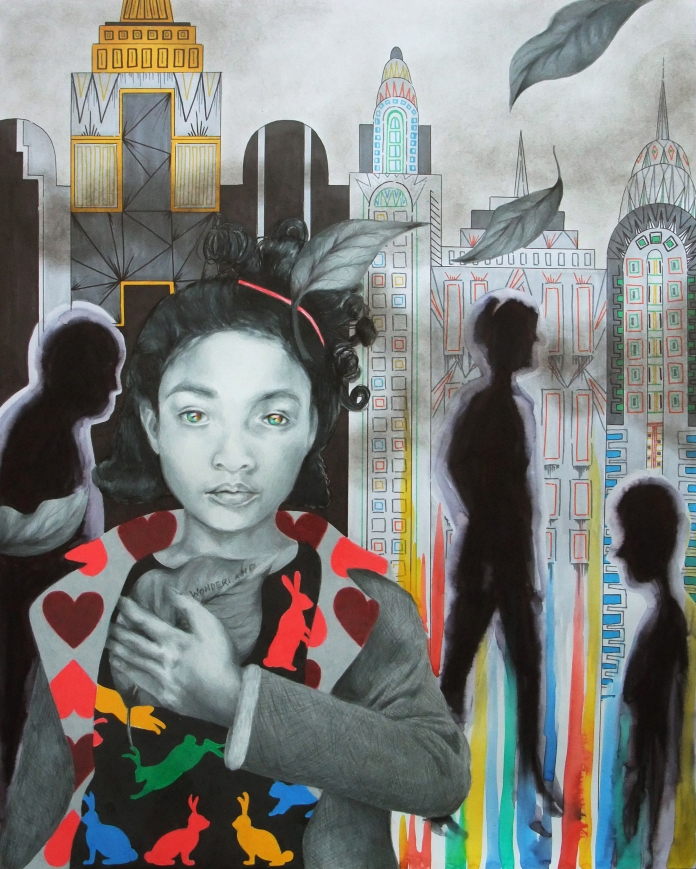 Last, I further developed the shading on the skin where needed to have harmony with the values of the background, dripped colorful watercolor up from the bottom of the composition, and chalked dark clouds over the background to recede it further back, and draw the eye to the figure. I believe it is now finished :).