A couple of months ago, something of a milestone in my artistic journey happened, and I cannot believe it has taken me this long to get around to sharing it. I completed a collaborative piece with another artist. Whoa, am I right?

I don’t always like working closely with others. I was the kid that dreaded group projects growing up. In college, for my huge final project I actually chose to do 4x the work of everyone else simply to avoid working with a group (Let’s be real, I always ended up doing all of the work anyway.). I like control, I like all the responsibility for either my own success or failure falling entirely on me. I have distinct memories of 5th grade in which we were tasked, in groups of 3, to build this big house out of cardboard, decorate it inside, and wire in actual working lighting with those fun little battery circuit kits you get to play around with in grade school.One of my group members was dancing around the room singing “Oops, I Did It Again” using her pencil as a fake microphone, I do not jest. The other group member  was insisting on wiring everything in such a way that none of our little ceiling bulbs would light up, and she would not take instruction. I finally couldn’t take it, and quiet mouse me who never made a peep all day told her bluntly that all her ideas were stupid. A temper tantrum by the accused ensued. I actually didn’t get into trouble because I was such a quiet kid, I think the teacher was just glad I finally spoke up and said something, anything, even if it was to berate a fellow student’s ineptitude.

Art is so personal too, to alter your vision, to compromise to allow room for someone else’s vision as well is super hard.

I first met my artist-in-crime, Heather, about 3 years ago when she took one of my Artshop classes at Creative 360. We felt a connection right away due to our similar artistic leanings and interests, and have been sharing our art and our journeys with each other ever since. There were certainly some rough patches along the way, but we’re still friends and have this adorable, girly, sad, disturbing masterpiece to show for it. So much metallic watercolor was used in the making of this art, that my sink is still sparkly.

This piece explores the idea of being taken advantage of, and seeing the best parts of you ripped away by the other’s abuse. It also conveys the idea of the sympathetic but complicit observer, who is silent as they witness harm and injustice.

Our styles meshed super well, which I honestly wasn’t expecting. Though we favor similar subject matter at times, we have totally different approaches to drawing. Who did what, can you guess?

Icing On The Cake, by Allise Noble (left) and Heather Deogracia (right).

March: She Is Everything At Once

Without the urging of a “Dynamic Duos” curated show at Studio 23 Gallery in which you were required to submit only art made in tandem with a fellow artist, I don’t think Heather or I would have attempted such a harrowing feat. Now that we’ve done it once, we may just try a second go around in the future… only time will tell. 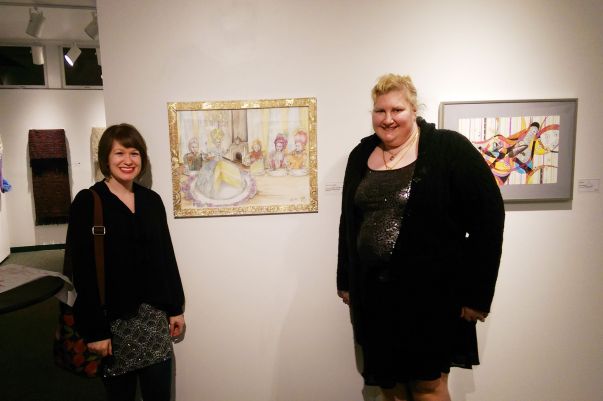