I got a bit behind on sharing my projects, but have now caught the awful Fall cold that is going around, so no better time than the present to sit and type with a hot cup of tea at my side. Gustav Klimt’s work, like that of the earlier covered Van Gogh, is one of those bodies of historical work that is recognizable even by non-artists because of his unique style that has been made readily available in print form to this day, and is appropriated and referenced constantly in new art. Though I’ve never experienced an emotional connection to his work, I love the use of metallics and vivid, overwhelming detail of his pieces as well as the merging of both realistic and painterly elements. 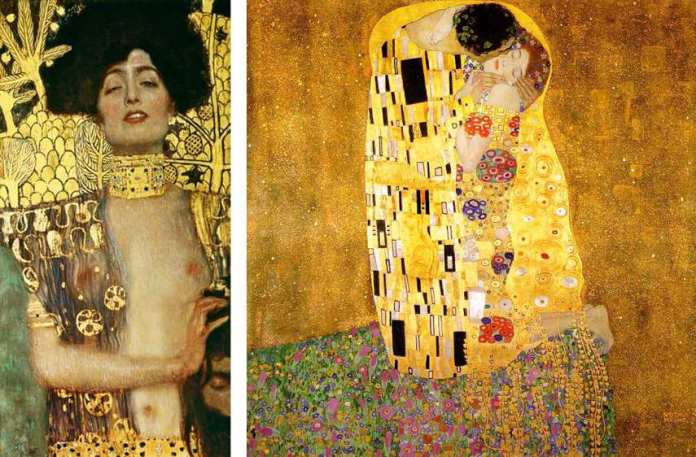 Klimt began as a decorative painter under the belief that art’s true purpose was to show viewers something beautiful, and got his start painting murals on the walls and stairways of lavish, wealthy homes. His personal work was charged with an eroticism that was not present in art at that time, and it earned him a good deal of disdain but he remained committed to depicting the beauty of the world as he saw it. His pieces have resonated and stood the test of time, enough that virtual immersive experiences of his work were made available this year in Paris and Austria.

Not all of his work is sensual in nature or contains nudity, and there are plenty of other examples to show as inspiration if you are doing this project with younger audiences.

Klimt’s work incorporated figures and portraits, but learning how to draw faces and the human body properly is a whole semester of lessons within itself! To make a Klimt project that was accessible to all skill levels, fun, experimental, and stress free, we used collage. Some of Klimt’s portrait work does remind me of a very early form of fashion editorials, so we cut out models and celebrities from Elle and Vogue magazines to become the subjects in our Klimt inspired artworks.

Students were then encouraged to place their magazine cutout where they wanted it on the page, and trace around it with pencil to save the space. I recommend gluing the magazine cutout on last so it doesn’t accidentally get smeared with paint. After outlining, students could add on and sketch the outfit of their dreams with pencil. Once the basic outline was complete, students filled in the background and clothing in different shades of metallic paint first, and then could add detail overtop with pattern. As I’ve mentioned before, I work with a lot of adults with disabilities and seniors in my art program. Painting small patterns with a brush can be hard for some depending on their dexterity level so we made this project more accessible by also introducing the use of ink stamps for those who were struggling with fine motor skill. Innovation can lead to some simply amazing results, as can be seen by the work-in-progress above! Be sure to check back soon for more artist-inspired project ideas!