Yikes, it’s been a whole month since posting last! My blog isn’t the only thing I’ve neglected … I must tattle on myself and admit that I gave up on Inktober after week 15! A half marathon if you will … perhaps I should have only committed to every other day! I have kept up with doing art every day though, which was the entire goal of Inktober to begin with. I was finding myself in the sticky situation of having to de-prioritize commissions and actual projects with deadlines in order to get my Inktober illustration finished for each day, which seemed counterproductive in the end. I do have a lot of fun art history based projects queuing up to share with you, and today our inspiration is an artist from my favorite genre of art: surrealism … Salvador Dali!

Dali is best known as “that melting clock guy” from his famous piece “The Persistence of Memory” that has now become a part of popular culture, parodied regularly. However, he also had a thing for tall and spindly creatures as evidenced from two more of his more well known works, “The Elephants” and “The Eye of Surrealist Time”.

My students in the Artshop Program love drawing animals, and the idea of depicting real things in a distorted way by stretching out their features was a concept that would be easy for everyone to grasp, so this seemed like a great jumping off point for making Dali’s work accessible.
Every work of art looks better behind glass, from works created by a master to works created by someone who specializes in stick figures. Though not every drawing or painting has to be framed especially in a classroom/learning setting, it’s nice every once in awhile. Pro-tip! Frames are expensive, but often times nice frames with ugly artwork in them can be snagged for cheaper than so-so frames that are empty at your local art supply store. These long, framed pastel-dyed crinkly paper guys were clearanced out, because this dentist-office-esque art is really bland and kind of hideous, not something that people would be racing to put on their wall at home. So, we got some custom dimension frames perfect for this tall animals project for super cheap, and just discarded the mass produced “art” inside! This project could be executed with any drawing or painting materials, but I had my students use watercolor markers because it was a medium not all of them had the opportunity to try before,  and the markers would allow us to get bright, saturated, unnatural colors like the deep reds and golds behind Dali’s elephants. 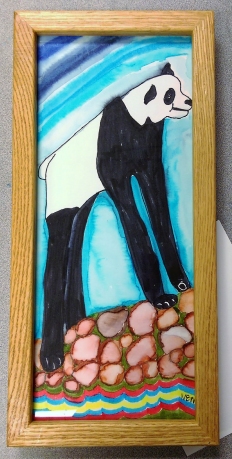 They found a photographic reference of an animal they liked for their subject, and then were encouraged to sketch on scrap paper and brainstorm how they could distort the image. They then made a pencil drawing on watercolor paper pre-cut to size, and used a sharpie pen to outline over the pencil so they wouldn’t lose their guide as they added the ink. The images were filled in with color and water, and there you have it! A simple, yet beautiful and intriguing end result where students had to challenge themselves to distort reality in an effective way. All ages and abilities could take this project in their own direction.

Happy creating! Remember, you are the artist, so you get to determine how you portray your world. Don’t be afraid to play with reality a bit ;).