I have always loved paper dolls, although they were a bit hard to find already even when I was young. I used to get American Girl Magazine in the mail, and each issue would come with a set of punch-out paper dolls based on REAL girls, with an outfit from present day as well as 3 more from women 1,2, and 3 generations back in her family. The dolls were my absolute favorite part, and I really wish I would have kept them now. The American Girl paper doll sets were the only ones I really played with, because more than just the different outfits to try on, I was captivated by all of the different PEOPLE!

This brings me back … I definitely had this one – along with near 50 others.

I would lay them all out and marvel over all of the differences – in build, in facial structure, hair color, skin color, eye color, smile … and no two people look exactly alike, even twins; how can this be? It blew my little 8-year-old mind.

Fast forward about a decade and a half later, and I got this crazy idea – what if I made a paper doll in which the “doll” was a skeletal structure and the “clothes” were the skin that goes over them? I adore detailing internal structures of both humans and animals. I swear if computers were never invented and they still needed people to hand draw the illustrations for medical textbooks, I would be your girl (then again, I would not be typing this blog either. No lie, I love technology. Goodbye obscure dream career, definitely worth the tradeoff.).

“God As The Artist”; bristol board, ink, acrylic, corrugated cardboard

At first this was just something quick I was going to do for fun for myself, but then I had to stop and think about why I was so excited about this idea. Both human beings and animals truly are moving, breathing works of art. They are living sculptures, filled with beautiful angles, textures and colors, and intricacies. We tend to idealize one type of beauty and overlook the artistry in anything that lies outside of that predetermined, narrow field. You would never walk into a gallery and say “My favorite color is violet, so I’m only going to look at the violet paintings. Any others, no matter how interesting or skillfully rendered, are completely worthless.” Yet how often do we write off other people in this same way?

Back view, depicted as a wall in an abandoned house complete with skeletal themed artwork and wallpaper print, “We are all living sculptures” 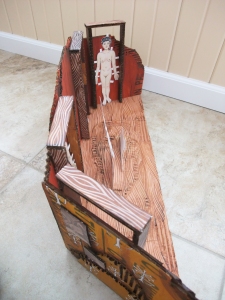 “God As The Artist” aerial view

I decided to include animals as well, because I really think we don’t have enough awe for how amazing they actually are. We get pumped about the unfamiliar and exotic, like lions and tigers at a zoo, but neglect to equally appreciate those living in our own backyards. In general, we kind of only notice animals when we need them for something, otherwise they are either an annoyance or just part of the furniture. I challenge you to go out for a walk on a nice day and pretend you are an alien from another planet who has never seen earth and its creatures before. Then really look, especially at the birds. Think of how tiny their skeletal system is, how it must interlock so that the framework of their wings can move as they need to in order to ascend into the air. Look at the colors and textures of their feathers. If that isn’t art, I don’t know what is. I guess that’s why I’ve never been one for hunting. There are increasingly less beautiful things in this world, why would you want to destroy something beautiful?

We are the most complex kinetic sculptures ever formed, and being alive surrounded by all this living and breathing wonder truly is a privilege. I forget that sometimes; we all do.

I still love drawing paper dolls for people to play with. Maybe every grown-up feels this way, but I’ve noticed that dolls, and the so-called “girl” sections in toy stores in general, kind of suck now. If I’m going to complain, I suppose I also have to do something about it! Since kids aren’t likely to play with skeletons, and also this crazy awkward giggling thing tends to happen when they are confronted with things like “boobs”, I have made many more child friendly sets since this one. I have two types of sets, one in which each girl has an “aspiration” theme (athlete, artist, chef, scientist …) and a pet, and another fantasy hero set in which your girl can save the world in various time periods and universes, from an imaginary world where superpowers exist to medieval Europe (Upon watching me draw the fantasy outfits, my boyfriend commented in surprise, “A girl knight?” and I swear to god, I almost clocked him. Exactly the kind of preconceptions I am trying to combat here ^_^.) Basically, I want to represent a wide variety of girls with a wide variety of personalities, styles, interests, talents, and dreams. I’m not done yet; as I touched on earlier, there are innumerable different types of people, that’s what’s so cool! But I’m working on it. 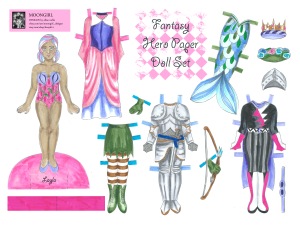 These paper doll sets and many more are available in my ebay store and etsy shop. If there’s a set you’d like to see, let me know! I take suggestions.

One thought on “Art Discussion – “God As The Artist””